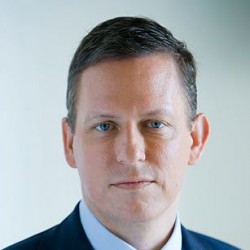 Peter Thiel is an entrepreneur and investor. He started PayPal in 1998, led it as CEO, and took it public in 2002, defining a new era of fast and secure online commerce. In 2004 he made the first outside investment in Facebook, where he serves as a director. The same year he launched Palantir Technologies, a software company that harnesses computers to empower human analysts in fields like national security and global finance.

He has provided early funding for LinkedIn, Yelp, and dozens of successful technology startups, many run by former colleagues who have been dubbed the "PayPal Mafia." He is a partner at Founders Fund, a Silicon Valley venture capital firm that has funded companies like SpaceX and Airbnb.

He started the Thiel Fellowship, which ignited a national debate by encouraging young people to put learning before schooling, and he leads the Thiel Foundation, which works to advance technological progress and long-term thinking about the future.

How many golf balls fit in a 747? How much would you charge to wash all the windows in Chicago? How many gas stations are there in Manhattan?

Tech companies like Google were once famous for vetting job candidates with quirky interview questions like these, but around five years ago, the riddles fell out of style.

“On the hiring side, we found that brainteasers are a complete waste of time,” Laszlo Bock, Google’s former SVP of people operations, told the New York Times in 2013. “They don’t predict anything. They serve primarily to make the interviewer feel smart.”

So, then what should interviewers ask? According to venture capitalist Peter Thiel, a co-founder of PayPal and Palantir, there’s one interview question to rule them all.

“What important truth do very few people agree with you on?”

In his book Zero to One, Thiel devotes an entire section to why he loves this particular question:

This question sounds easy because it’s straightforward. Actually, it’s very hard to answer. It’s intellectually difficult because the knowledge that everyone is taught in school is by definition agreed upon. And it’s psychologically difficult because anyone trying to answer must say something she knows to be unpopular. Brilliant thinking is rare, but courage is in even shorter supply than genius.

The question, in many ways, encapsulates the thesis of Thiel’s book. To go from “zero to one” is to do things no one has ever done (as opposed to going from 1 to n, which is to make incremental progress on something already known to be true). In Thiel’s mind, his favorite interview question vets a candidate’s ability to think independently, which is a harbinger for an ability to innovate.

And how would Thiel himself answer the question?

My own answer to the contrarian question is that most people think the future of the world will be defined by globalization, but the truth is that technology matters more. Without technological change, if China doubles its energy production over the next two decades, it will also double its air pollution. If every one of India’s hundreds of millions of households were to live the way Americans already do— using only today’s tools— the result would be environmentally catastrophic. Spreading old ways to create wealth around the world will result in devastation, not riches. In a world of scarce resources, globalization without new technology is unsustainable.