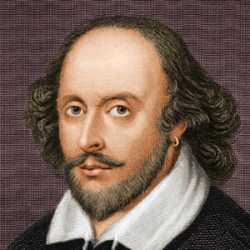 This is an original transcript from interview with William Shakespeare, broadcasted at noon on Monday the 13th of March called, “Willie on the Spot”

NOTE: BASED ON THE FACTS! (of shakespeare's life and work.)

Interviewer: Thank-you, listeners, for tuning into 97.3 FM “Classic orchestra music around the clock!” Today we are featuring program called, “Willie on the Spot”. I would like to thank Mr. Shakespeare for coming down to the studio.

Shakespeare: Oh, It is my pleasure.

Interviewer: I would like to begin by asking some straightforward questions. When and where were you born, Mr. Shakespeare?

Shakespeare: Please, call me Will. I was born in Stratford, England, by the river Avon, on April 23rd, 1564.

Interviewer: Many people are not aware of your family life; care to comment?

Shakespeare: Well, I would rather not go into personal matters but I will say that my father was a glove maker who eventually became mayor of Stratford.

Interviewer: Since you had a very ordinary back ground, what kind of education did you receive?

Shakespeare: I was only able to attend the Stratford grammar school but there I learned such things as latin and greek.

Interviewer: Now Will, many people suspect that you are not the true author of many of your famous plays, they believe perhaps Sir. Francis Bacon is the author. Do they have just caused to do so?

Shakespeare: Absolutely not! Some people believe that merely because I had a simple up bringing and a lesser education that I am not the author. They also try to attribute my work to Christopher Marlow but I assure you, I am the true author. I can only say that it is jealousy that drives these men to take away my credit for the work I have done.

Interviewer: On another topic, how did you get started in theatre?

Shakespeare: My first job was to hold the horses of men who stop outside the theatre.

Interviewer: Rumours have spread about your acting abilities, any truth to them??

Shakespeare: Well, as it happens, I am quite a poor actor. I usually only take small roles in my own plays. Fortunately my abilities as a playwright are much more aspiring and have made me a partner in one of the best theatre companies, “The Lord Chamberlain’s Men.”

Interviewer: Will, it is said that you were married at 18 to Anne Hathaway. It is also known that you had three children with her, yet you left them in Stratford to move to London. Care to comment?

Shakespeare: No, as I said before, I do not wish to discuss my personal life. I would prefer to talk about my work.

Interviewer: Very well. Where do you get the ideas for your plays?

Shakespeare: Most of the are derived from well-known stories and history.

Interviewer: You are often critizied for the lack of originality in your plays because they come form such well-known stories. Will you explain the purpose of doing this?

Shakespeare: Since there are so many good stories to work with there is no reason for me to invent new ones. Also, I can count on my audience to be familiar with the subject matter of my plays. Basically, I take well-known legends and make them better.

Interviewer: Do you ever try to teach values of lessons about life in your plays?

Shakespeare: Most definitely. If you take for example “Romeo and Juliet” you will see that the lesson is we should not keep old feuds alive. Fighting amongst ourselves will only lead to tragedy and a loss for all.

Interviewer: What encourages you to write?

Shakespeare: Despite the fact that I love to write, I must also admit that I do it to get paid. One must make a living you know?

Interviewer: Do you write for anyone in particular?

Shakespeare: yes, I write for myself and, of course, the audience. I must please the audience or I would be out of a job. Beyond this I do not care to comment.

Interviewer: How exactly do you try to entertain different classes of people who watch you performances?

Shakespeare: There can be quite a mixed audience, from the nobility and well educated to those who can’t even spell their own name. To keep them all interested I include a lot of action in my plays, such as sword fighting, dancing, songs, and clowns. The more educated are able to appreciate the plot and acting in my plays, though they too do enjoy a good sword fight!!

Interviewer: Do you believe women should be allowed on stage?

Shakespeare: I must sat that it is unthinkable that any woman who wants to keep her reputation will ever appear on stage. Any theatre company who openly uses women actors could lose their sponsorsuyy76 and its audience.

Interviewer: Lastly Will, I was hoping that you could give some advice to aspiring playwrights and actors.

Shakespeare: Of course. There is no secret to becoming a great playwright or actor, it simply takes courage and devotion. You can never give up! Listen to the criticism giver to you and learn from your mistakes. That is the only way to be the beset.

Interviewer: What wonderful words spoken by the famous, Mr. William Shakespeare. I’m afraid we’re out of time, but I would again like to that Will…

Shakespeare: It was my pleasure.

Interviewer:…and all those who tuned into 97.5 FM!