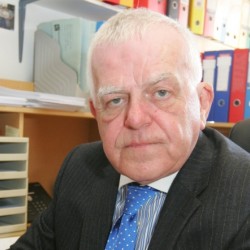 He has been published under several pseudonyms: P.C. Doherty, Celia L. Grace, Paul Harding, Ann Dukthas, Vanessa Alexander, Michael Clynes and Anna Apostolou but now writes only under his own name.

Paul Doherty was born in Middlesbrough (North-Eastern England) in 1946. He had the usual education before studying at Durham for three years for the Catholic priesthood but decided not to proceed. He went to Liverpool University where he gained a First Class Honours Degree in History and won a state scholarship to Exeter College, Oxford, whilst there he met his wife Carla Lynn Corbitt. He continued his studies but decided that the academic world was not for him and became a secondary school teacher.

Paul worked in Ascot, Nottingham and Crawley West Sussex before being appointed as Headmaster to Trinity Catholic School in September 1981. Trinity is a large comprehensive [1700 on roll] which teaches the full ability range, ages 11-18. The school has been described as one of the leading comprehensives in the U.K. In April, 2000 H. M. Inspectorate describe it as an 'Outstanding School', and it was given Beacon status as a Centre of Excellence whilst, in the Chief Inspector’s Report to the Secretary of State for January 2001, Trinity Catholic High School was singled out for praise and received a public accolade.

Paul’s other incarnation is as a novelist. He finished his doctorate on the reign of Edward II of England and, in 1987, began to publish a series of outstanding historical mysteries set in the Middle Age, Classical, Greek, Ancient Egypt and elsewhere. These have been published in the United States by St. Martin’s Press of New York, Edhasa in Spain, and Eichborn, Heyne, Knaur and others in Germany. They have also been published in Holland, Belgium, France, Italy, Romania, Estonia, Czechoslovakia, Russia, Bulgaria, Portugal and China, as well as Argentina and Mexico.

He has been published under several pseudonyms (see the bibliography): C. L. Grace, Paul Harding, Ann Dukthas and Anna Apostolou but now writes only under his own name. He recently launched a very successful series based around the life of Alexander the Great, published by Constable & Robinson in the U.K., and Carroll and Graf in the U.S.A., whilst his novels set in Ancient Egypt have won critical acclaim. Paul has also written several non-fiction titles; A Life of Isabella the She-wolf of France, Wife of Edward II of England, as well as study of the possible murder of Tutankhamun, the boy Pharaoh of Egypt’s 18th Dynasty, and a study on the true fate of Alexander the Great.

Paul and Carla live on the borders of London and Essex, not far from Epping Forest and six of their children have been through his own school. His wife Carla currently owns two horses and is training, for showing and dressage, a beautiful Arab filly named Polly.

Paul lectures for a number of organisations, particularly on historical mysteries, many of which later feature in his writings. A born speaker and trained lecturer Paul Doherty can hold and entertain audiences.

His one great ambition is to petition the Privy Council of England to open the Purbeck marble tomb of Edward II in Gloucester Cathedral. Paul believes the tomb does not house the body

Interview with Paul Doherty, Author of The Herald of Hell

Tell us a little bit about your new release, The Herald of Hell.

‘The Herald of Hell’ is a medieval mystery, a tale of murderous mayhem in the London of 1381. The Peasant’s Revolt is imminent. The vortex of violence has begun. The terror which is about to engulf the city is now a grim reality. The peasant armies from the surrounding shires are determined to invade London, seize the Tower and, some whisper, kill the young king, Richard II. Secret messages are passed backwards and forwards. Spies meet at the dead of night. Men who should be trusted, betray their masters and commit grisly suicide in a London brothel. All these are strands pointing to the coming violence. People whisper about the Day of the Great Slaughter when the strongholds fall and the New Jerusalem emerges on the banks of the Thames. Others plot a more gruesome way forward where the city is purged through a bloodbath and a new system of government is imposed.

If you had to pick one place to vacation for the rest of your life, where would you choose?

The place I would chose for a vocation for the rest of my life would be Rome. They call it the Eternal City and rightly so. It’s also eternal in its attractions, be it the Coliseum or the Catacombs or a walk down the Via Appia where Crassus crucified Spartacus and his followers. Rome is a great city of marvellous beauty and yet chilling bloodthirsty memories. There is so much to see both within and without.

Who was your childhood hero?

My childhood hero would have to be Sherlock Holmes, that enigmatic figure striding through the misty streets of Victorian London in hot pursuit of some cold-hearted murderer or deadly assassin.

If you could invent anything, what would it be?

If I could invent anything it would be a computer that can take dictation directly and accurately.

What’s on your writing desk?

My writing desk is littered with pens, paper, little gifts, important books and the manuscripts of novels I am currently working on.

Who is your favorite historical figure?

My favourite historical figure must be Joan of Arc. An absolutely incredible woman, a military genius and a born leader. A true saint but also a soldier. How can you forget Joan shouting at an English mercenary captain to show himself, “Come out Glasdale, so I can send your soul to Hell.”

What’s your favorite quote or scene from The Herald of Hell?

I like the way the novel ends, “That when the storm breaks and the lightning flashes in one corner of heaven to light up the other, we shall all be sheltering under the same tree, Master Thibault.”

Do you have a motto, quote or philosophy you live by?

My favourite quote is from the Jesuit poet Hopkins, “The world is charged with the Grandeur of God. It will shine out like the shining from shook foil…..