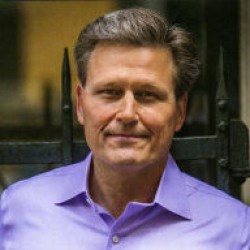 David Baldacci is the bestselling author of a number of thriller series, including Memory Man, Will Robie, John Puller, and others. His books are published in over 45 languages and in more than 80 countries, and have been adapted for both feature film and television. David Baldacci is also the cofounder, along with his wife, of the Wish You Well Foundation, a nonprofit organization dedicated to supporting literacy efforts across America.

Caleb Carr – The author of The Alienist shared the inspiration of his tour-de-force with us and also spoke about the craft of writing, history, and Theodore Roosevelt.

Steven Moffat – The writer and producer of the hit TV series Sherlock spoke to us about his admiration for Arthur Conan Doyle and a gave us a behind the scenes look at working with Benedict Cumberbatch.

C.J. Box – The bestselling Wyoming author shares his tips on how to write a bestselling novel and gives us the scoop on his journey to becoming a top thriller author.

Robert Crais – The bestselling author of L.A. Requiem gives us a glimpse into the creative process behind his wonderful crime novels.

Dick Francis – The late writer and racing jockey shared his experiences and over an hour and a half was a great storyteller.

Linda Fairstein – The bestselling author and former prosecutor, spoke about her latest novels and her career in law.

Colin Dexter – The creator of Inspector Morse spoke to Andrew Gulli about the inspiration behind his characters, the writing process, and the city of Oxford (the location for most of his books).

Mickey Spillane – Perhaps one of the feistiest interview subjects–Spillane gave this entertaining interview just a few months before he passed away.

Elmore Leonard – While in Leonard’s office, the legendary writer mapped out his work technique and of course gave some much needed advice to aspiring writers, “cut out the parts which readers skip.”

Reginald Hill – The award winning creator of Dalziel and Pascoe shared the lessons he’s learned after over thirty years of writing some of the best British mysteries.

Robert B. Parker – The late but never to be forgotten Parker was a wisecracking interview subject, but beneath that steely exterior you could see the vast warmth and intellect that Parker possesed.

Alexander McCall Smith – If there was ever a writer whose books matched his warmth and generosity, it’s Alexander McCall Smith. The bestselling author of the No. 1 Ladies Detective Agency spoke about his experiences in Africa, Law, books, and his incredible imagination.

Sue Grafton – The bestselling author of the Alphabet series of books, spoke about her characters, working as a screenplay writer, and of course gave some tips on finding a good hamburger in California.

Elizabeth George – During the hour long interview, virtually gave a writing clinic which would not only interest aspiring writers but readers as well.

Jeffery Deaver – A sincere, and frank interview subject, Jeffery Deaver is universally acknowledged as one of the greatest living thriller writers, his words of wisdom about writing, educational system, and the creative process made this one of the best interviews ever published in the Strand.

R.L. Stine – The creator of the phenomenally successful Goosebumps is also a huge mystery thriller fan with excellent forays in to the adult mystery genre.

Douglas Preston – The acclaimed thriller author spoke about an episode in his life that’s almost as strange as a plot in one of his books.

David Baldacci – The author of mass market thrillers, who has elevated the genre and written several “thinking men’s” books shared his knowledge about the craft of writing, reading, and his struggles as a writer before achieving enormous success.

Stacy Keach – The well known star of Mike Hammer spoke to the managing editor of the Strand Andrew Gulli about his long and illustrious career as an actor.

Anne Perry – If there is a mystery writer today who can pick up where John Dickson-Carr, Dorothy Sayers, G.K. Chesterton, and Arthur Conan Doyle left off, it would certainly be Anne Perry. Her books have sold more than ten million copies worldwide, earning her a reputation as one of the most popular writers today.

David Suchet – is known to millions of people around the world for his superb portrayal of Agatha Christie’s Belgian detective, Hercule Poirot, in London Weekly Television’s series Poirot, which lasted for six years-from 1988 to 1994. After a five year hiatus Mr. Suchet has reprised the role of Hercule Poirot in two new films by A&E.

Michael Bond – Since 1983 mystery fans have enjoyed Michael Bond’s series of detective comedies featuring retired Surete member Monsieur Aristide Pamplemousse and his dog Pommes Frites. The Monsieur Pamplemousse novels are a unique blend of comedy and mystery just what you’d expect from the creator of the very unique Paddington Bear. Mr. Bond spoke to Andrew Gulli about his early writing career, the inspiration behind his two most famous characters, and the state of writing in general.

Sir Peter Ustinov – is a man of many talents. He has used his talents as an actor, playwright, director, producer, writer, and set designer to entertain and enlighten audiences the world over. He remains an eloquent and tireless voice for world peace and understanding between nations. For the past 31 years he has served as ambassador-at-large for UNICEF.

Christopher Lee - In a career spanning over four decades, Christopher Lee has entertained audiences in a wide variety of roles, portraying characters that range from the diabolical and sinister to the wise and elderly, justly earning a reputation as one of the world’s most versatile actors

Peter Lovesey – is widely regarded around the world as one of the most skilled practitioners of both the historical and the contemporary crime novel. His long list of award-winning novels and short stories, whether set in Victorian or contemporary times, capture their respective periods evocatively through Lovesey’s canny ear for dialogue and seamless interweaving of plot and atmosphere.

Michael York – The esteemed and versatile actor shared his thoughts with us about his career, his writing, and his upcoming projects.

Mildred Wirt Benson – The Strand magazine has an exclusive interview with original Carolyn Keene, the original author of the Nancy Drew series.

Joss Ackland – One of England finest stage and character actors spoke to about his long career and his various dark and villainous roles, from films such as Lethal Weapon to Raymond Chandler’s “House on Turk Street.”

Sir John Mortimer – The creator of Rumpole of the Bailey spoke to us about Rumpole, his legal career, his plays, and best-selling novels.