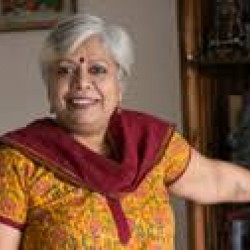 Scharada Dubey is a mature and versatile author with 15 books published by well-known publishers over a long writing career. She is presently a Consulting Editor for Vishwakarma Publications, Pune.

Her books reflect the reality of contemporary India, as she is primarily a writer of narrative non-fiction, after having begun her writing career with children's writing under the name Scharada Bail, her name before her divorce.

She has written about poor toymakers who sell their toys on the streets, about the reality of Ajodhya 20 years after the Bari demolition, and her book on the Kanhaiya’s who offer prayers to Shiva during the month of July-August at several important temples across India is coming out in October 2013 from Tranquebar-Westland.

She is a certified trainer in English and Business Communication. She conducts Teacher Support Programmed for Cambridge English Language Assessment across Western India.

Scharada has used her skills in writing and communication to empower and encourage people through her work as a Tarot practitioner in Chennai, Lucknow and Pune.

Scharada now lives and works in Pune after many years spent in Chennai and Uttar Pradesh, besides childhood and growing up in Mumbai. This gives her a familiarity with Hindi, Marathi, Tamil and Kannada, and an ease of access across regional and cultural identities.