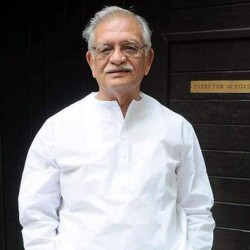 "Gulzar is one of India’s most respected scriptwriters and film directors, and has been one of the most popular lyricists in mainstream Hindi cinema for over five decades.

One of the country’s leading poets, he has published a number of poetry anthologies and collections of short stories.He is also regarded as one of India’s finest writers for children.

Apart from many Filmfare and National Awards for his films and lyrics—and an Oscar and Grammy for the song Jai ho—Gulzar has received the Sahitya Akademie Award in 2002 and the Padma Bhushan in 2004. He lives and works in Mumbai."

The most intimate Gulzar interview yet: By noted Bollywood lyricist Kausar Munir

My appointment is for 3pm, but I arrive at ‘Bosky Ana’ half an hour early – part nerves, part excitement. I step into the portico of the graceful Pali Hill bungalow and feel as if it knows my name.

As if it’s softly calling out to me in a gentle baritone, “Kausar… Kausar…”I turn around and there he is, Gulzar, in his signature starched white kurta-pajama, pronouncing my name perfectly, ushering me into his study.

“Ache late Hai,” is the straightforward answer. “I’ve been wearing white since my college days. I like color, but if I wear colored clothes now, it would feel like I’m being false. And that’s the worst thing I could be. Something other than myself. Either in work, or in life.”

So you’re most yourself in a kurta-pajama?

“But I have never worn a pajama! This is a regular pair of trousers, with the front crease and everything. Earlier, I wore a dhoti quite often, and thankfully, nobody ever pulled it down,” he laughs.

“I still wear a shalwar on invar (Sunday), the Punjabi-Pattani one, like they wear in my home town of Deena, now in Pakistan.

“My songs are not angry or bitter, because I am not bitter. I’m hopeful, and as an artist I have to be, not just for my future or for the future of my children but for the whole world ”“That he can’t wear shorts and play tennis.

They imagine him on a run-down bicycle rather than driving around the country in his own car. They have an image of him spouting only Ghalib and are surprised when he mentions Sting is an inspiration,” he says without a trace of frustration.

No disappointment at such assumptions?

“None at all,” he smiles. “I do play tennis in shorts, I have driven across the length and breadth of the country from Harding La pass to Kanyakumari in my beloved Ambassador car, and I did compile my 100 Lyrics book, inspired by Lyrics by Sting. I don’t subscribe to any definition of an Urdu poet.”

There is an imposing marble bust of Ghalib in the corner of his study, but Gulzar’s large writing-table is laden with international literature and works in several Indian languages.

“You ask how I stay relevant even after more than five decades of writing?” He points to his table, “By feeling the pulse of the gully-Mohalla, the nation, the globe that I live in.

Being master of Urdu doesn’t interest me, being part of the global society does, breathing hope into that society matters to me”.

“Being master of Urdu doesn’t interest me, being part of the global society does, breathing hope into that society matters to me”

A case in point is his latest book Footprints on Zero Line. Even though it deals with his painful first-hand experience of partition, a theme Gulzar keeps returning to, it’s imbued with a sense of purposeful history.

But how does one breathe hope into a self-destructive world?

“We have to ‘especially’ now,” he says surprised at my pessimism. “Aren’t you a poet? It is the job of a poet to give back, to breathe oxygen into the suffocation of society. In Haider, even though it’s burdened, my Jhelum is looking for a kinara, it’s not drowning itself…

In Yuma, the Dalit voice says ‘took de kill’, our time has come… Even in Mere Apnea (1971), my first film as director, I’m using a tongue-in-cheek approach to make a political statement with ‘Hal chalk them thank Hai’.

My songs are not angry or bitter, because I am not bitter. I’m hopeful, and as an artist I have to be, not just for my future or for the future of my children but for the whole world.”

As a ’90s kid, I grew up on Gulzar’s fascinating potlid of rhymes and jingles and Hubli china chains. And I’m dying to know does Chena vale junk ka baba have anything to do with Chena, Sarukhan Sinha’s character from Mere Apnea?

“If you notice, many great artists have been inspired by children’s literature. It’s where the world unfolds, else everything will seem like a blind alley”

“No, no,” he laughs. “It’s just sounds…sounds of a deli, of a khanjar…sounds and spirit of children. Upendrakishore Ray Chowdhury’s Goopy Gynae Baha Bynoe has been a huge inspiration. If you notice, many great artists have been inspired by children’s literature. It’s

where the world unfolds, else everything will seem like a blind alley.”

I feel like Alice in Wonderland as I delve deeper into Gulzar’s tap topic topic of enchanted words. Where does this inventiveness comes from?

“It comes from you, the children. See what a good job I did of raising you. How hard I’ve worked to keep you amused,” he says with twinkling eyes. “Even now I’m writing continually for children’s theatre, collaborating with the wonderful theatre director Salim Aric.

We recently did an adaptation of Pinocchio which was performed at the Indira Gandhi Stadium in Delhi. Around 200 children did Kathak to a full live orchestra. No recorded music. You should come and watch us sometime.”

It’s not just children’s literature. The name Gulzar is synonymous with breaking poetic traditions to create brand new ways of seeing things. It’s what he’s most loved for. “And most criticized for,” he reminds me. “Right from the beginning of my career.”

“It’s only because of the unusual script situations and characters that I can come up with new images. If the character is a drunk gangster in Mumbai, I can’t have him be Shajarian, he will sing ‘Golic maar bhaji main’”

I have even romanced my wife with this song. But at the time, many experts found it most objectionable that I should attribute a sense of smell to the eyes. The scholar-writer Dr Rahil Masood was most

displeased with my experimentation with poetic-grammar when I wrote the song Naam gum jaayega. In the case of Meera much seaman from Ijaza (1987), I faced a lot of flak initially for my free verse… But now someone like A. R. Rahman constantly breaks the structures of music and that’s why I enjoy working with him. Also Vishal Bhardwaj.

Isn’t that a stance only a Gulzar Sahib can afford to have? Lyric-writers today have no choice but to ‘crack hook-lines’ and write to the tune of the musical powers that be?

“When I write, the only thing I have in mind is the script,” he says. “It’s only because of the unusual script situations and characters that I can come up with new images. If the character is a drunk gangster in Mumbai, I can’t have him be Shajarian, he will sing ‘Golic maar bhaji main’.”

But not all scripts are as uniquely textured as Satya (1998). Right?

“I had three releases around the same time in 2016, Mirza, Rangoon and OK Janu. All largely love-stories. Had I not paid close attention to the characters and taken my cue from their unique worlds, they’d all have ended up sounding the same and having generic love songs,” he explains.

But isn’t it annoying when people damn the songs of today for not being ‘as good as they used to be’. How can one fight with nostalgia?

“Don’t fight, don’t be annoyed, respond as a writer and write for the world you’re living in today,” he instantly calms the disgruntled lyricist in me.

“Even populist songs can be worthwhile. For example, people may see Beedi allay le as an item song, but it is actually my take on the zamindari system…

It’s only when we are writing for the movies by learning from the movies that the work is superficial. Learn from life first and bring that knowledge to your writing.”

Which makes me wonder. With almost 55 years of professional writing behind him, what more can Gulzar give to writing?

“A lot more, and nearly not enough,” says the 83-year-young master poet. “For the last few years I’ve been working on this vision, a book on the contemporary poetry of India. I’ve translated around 500 poems, of 300 poets from 32 languages of our country. No masters, just contemporary poets. I want to make our poetry young again.”

Poetry, then, is his first love?

“Even populist songs can be worthwhile...people may see ‘Beedi allay le’ as an item song, but it is actually my take on the zamindari system”

“Yes, poetry remains closest to me of the many things I’ve done in life. And language is no bar.”

He smiles at me and asks me to send him a copy of my piece to see how ‘I’ve worked him out’, and I quickly ask for a picture with him. He’s happy to oblige, but as I fish out my phone, he gently says, “Let’s take a proper picture, not a selfie.”

I do leave with a proper picture of Gulzar Sahib in my mind – strong and sublime at the same time, in shades of splendid white.

I suspect not even eke say salah Chand Ki rating will compare to this room-warming November afternoon.