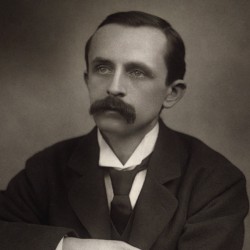 James Matthew Barrie (1860–1937) was a Scottish novelist and playwright who wrote for both adults and children.

He is best remembered as the creator of the character Peter Pan, who first appeared in the novel The Little Bird in 1902.

The character became popular in 1904, when Barrie wrote the hugely successful play Peter Pan; Or the Boy Who Never Grew Up. He later turned it into a novel called Peter and Wendy.