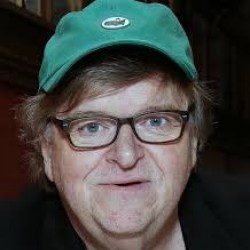 Michael Moore is an Academy Award-winning American filmmaker, bestselling author, and liberal political commentator. He is the director and producer of Bowling for Columbine, Fahrenheit 9/11, and Sicko, three of the top five highest-grossing documentaries of all time. In September 2008, he released his first free movie on the Internet, Slacker Uprising, documenting his personal crusade to encourage more Americans to vote in presidential elections.

He has also written and starred in the TV shows TV Nation and The Awful Truth. His bestselling books include Dude, Where's My Country and Mike's Election Guide 2008.Moore is a self-described liberal who has explored globalization, large corporations, gun ownership, the Iraq War, U.S. President George W.

Bush and the American health care system in his written and cinematic works. In 2005 Time magazine named him one of the world's 100 most influential people. In 2005, Moore started the annual Traverse City Film Festival in Traverse City, Michigan. In 2008, he closed his Manhattan office and moved it to Traverse City, where he is working on his new film.