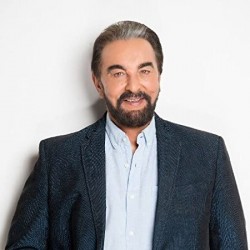 Kabir Bedi is known worldwide for his roles in The Bold and the Beautiful, the James Bond film Octopussy, his European series Sandokan, and his Bollywood blockbuster Khoon Bhari Maang. He has done many fil ms and television series in Bollywood, Europe and Hollywood. His credits include starring with Michael Caine in Ashanti and Roddy McDowall in Thief of Baghdad, and playing the title role in the Italian film The Black Pirate (Il Corsaro Nero). On American television, he has acted in Highlander, Murder She Wrote, Magnum, P.I. , Dynasty and many HBO mini-series. On stage, he starred in John Murrell’s Taj at the Luminato Festival in Canada, and M.M. Kaye’s The Far Pavilions in London’s West End. In India, he has done close to seventy Bollywood films, famously starring with Rekha in Khoon Bhari Maang.

Kabir is known for his philanthropic and social causes. He is the Honorary Brand Ambassador of SightSavers India, which gives sight to the visually challenged, and of Care & Share Italia, which educates and looks after street children, from school to university, in Andhra Pradesh and Telangana.

Kabir lives with his wife Parveen Dusanj, a producer, in Juhu, Mumbai. He is writing his next book, continues to act and is a commentator on television. He voices ad films and documentaries, and travels regularly to his three favourite cities, Rome, London and Los Angeles. For Kabir, all the world’s a stage.