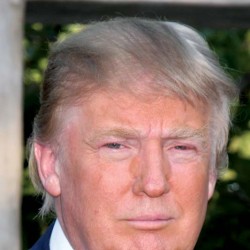 Donald John Trump is an American business executive, entrepreneur, television and radio personality, author and 45th President of the United States of America. He is the CEO of the Trump Organization, a US-based real-estate developer, and the founder of Trump Entertainment, which operates several casinos.

He received a great deal of publicity following the success of his reality television show, The Apprentice (in which he serves as both executive producer and host for the show). He is the son of Fred Trump who was a wealthy real estate developer based in New York City.