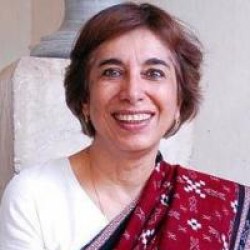 Manju Kapur is the author of four novels. Her first, Difficult Daughters, won the Commonwealth Prize for First Novels (Eurasia Section) and was a number one bestseller in India.

Her second novel A Married Woman was called 'fluent and witty' in the Independent, while her third, Home, was described as 'glistening with detail and emotional acuity' in the Sunday Times. Her most recent novel, The Immigrant, has been longlisted for the DSC Prize for South Asian Literature. She lives in New Delhi.

An interview with Manju Kapur

From inspirations for her writing to the issues she addresses, to talking about her latest novel- Custody, author Manju Kapur tells it all here…

Q. Manju, you’ve been called the great chronicler of the Indian middle class. Would you agree?

That sounds a grander title than I would like to lay claim to. I don’t think of myself as a chronicler of the middle class – but yes, I have so far drawn most of my inspiration from there, since that is the class I know best. In my next novel I move away from the middle classes, so I don’t see myself as having a fixed subject.

Q. Sexual abuse, the politics of arranged marriages, infertility and its stigma, adoption, divorce, infidelity, sexual dysfunction, now custody battles – Would you call yourself an issue-based writer and is there a subject you won’t touch?

I think all issues are grist to the writer’s mill. Depends on what inspires you, what pushes the narrative forward. In my case it has been the things you mention, but rather than focus on the divorce, infidelity etc., I look at the consequences of these actions, which I find more interesting. Not what propels a divorce, but what the long term consequences of this are for everybody concerned.

Q. Who do you write for?

When I write it is really for someone like myself. Writing is such an intimate activity, but the result of which gets played out in the public sphere. So although as a writer I am essentially in dialogue with just myself, as a published author I want to reach as many people as possible.

Q. Custody is the first novel you’ve written after your retirement from Miranda House. Did it make a difference?

Absolutely it made a difference. Although I miss my academic life dreadfully, I do have a sense of leisure that I didn’t have while I was teaching. There I was always working to a schedule, I have to finish such and such draft before term starts. This put my writing under tremendous pressure. I never went anywhere – even on vacation with my family – without counting the cost. Often I didn’t go, because I had so much to do.

Q. It’s also the one novel in which virtually none of the characters come out well, and in this sense is perhaps your darkest novel. You seem to be saying that divorces, custody battles make monsters of all of us. Would you agree?

And here I have been thinking that although none of the characters come out wholly shinning, you do sympathise with them all! Misery, anxiety, tension does bring out the worst in us – that would apply to any conflict situation. Where children are concerned, ones deepest feelings are at stake, and this provokes all kinds of extreme behaviour.

Q. Would you say any of your books are autobiographical?

I obviously write about the things I know well – I wouldn’t be able to write about them otherwise. But my novels are imaginative reconstructions. I feel uncomfortable writing about recognisable situations. The one exception was my first novel where I used some of the details from my mother’s life, but this was with her permission.

Q. Who are the writers who have influenced you the most? I always sense Jane Austen and Elizabeth Gaskell peering through.

I love being compared to Jane Austen, this is such a compliment – but unfortunately I don’t think it is true. First of all she was a genius and I am not. Secondly her canvas is a narrower one than mine. But yes, there is one thing in common – and probably one shared by a lot of women writers – addressing larger social, economic and gender issues through the prism of the family.

Q. You’ve said that you’re always writing a number of novels at the same time. Is that true? And if so what’s on your writing desk at the moment.

Yes, I do write a number of novels at the same time. Earlier this was because of my teaching schedule. First drafts in term time [when you are not required to hold the whole novel in your head], major editing work during the holidays.

Now I am not teaching, and I don’t have so many novels going on at the same time. I do sketch out ideas for different works when I get them – but these are tentative and brief affairs.

Q. Who are the writers who have influenced you the most?

No particular writers that I can immediately name. That is not to say that I have not been influenced, and enormously so, by literary texts. What fascinates me endlessly are the thousands of ways in which experience can be transmitted in novels. But when I sit down to write I am trying quite consciously to find the most authentic, seamless way to relate my story and then I am not aware of any models but rather what will seem most true.

Q. Are there any issues that you would never write about?

Not really. I would touch on any subject, but there are certain aspects which I feel uncomfortable writing about. For example, I find it hard to write physical descriptions of violence, exploitation, brutality – that kind of stuff is not for me.

Q. Finally, rumour has it that soap opera queen Ekta Kapoor once made an offer to you to write for her. Is that true?

Long ago, I even forget how long ago it was, someone from her office did phone with an offer to be a writer for her. Since this involved moving to Bombay the whole thing fizzled out there and then. I doubt she even remembers