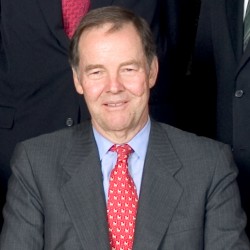 Prior to the govern rship, Kean served for ten years in the New Jersey Assembly, rising to the positions of majority leader, minority leader, and speaker. As governor, he served on the President’s Education Policy Advisory Committee and as chair of the Education Commission of the States and the National Governor’s Association Task Force on Teaching. While president of Drew, Kean served on several national committees and commissions.

Kean headed the American delegation to the UN Conference on Youth in Thailand, served as vice chairman of the American delegation to the World Conference on Women in Beijing, and was a member of the President’s Initiative on Race. He also served on the National Endowment for Democracy. He currently sits on several corporate boards, including ARAMARK, Hess Corporation, Pepsi Bottling Group, and Franklin Templeton Investments.

He holds a B.A. from Princeton University and an M.A. from Columbia University Teachers College, as well as more than 25 honorary degrees and numerous awards from environmental and educational organizations.