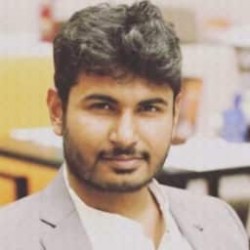 "Harsh Snehanshu is the bestselling author of the Kanav-Tanya trilogy, comprising the novels Oops! ‘I’ Fell in Love, Ouch! That ‘Hearts’, and She’s Single, I’m Taken. He is a graduate of IIT Delhi and a former internet entrepreneur.

Not many budding authors end up harnessing the power and potential of social media platforms. And we were pleasantly surprised when Harsh Snehanshu smartly “crowdsourced” the title of his new book. Wait…we shouldn’t be doing all the talking. Here’s Harsh talking about his inspirations, ideas, wit, social media and more!

What inspired/provoked you to write “Oops! I Fell In Love…just by chance”? How did you stumble upon the title? Ain’t it just too long?

The novel’s creation was miraculous. I started writing it on my blog hoping to come up with a short comedy of errors about a guy who goes on his first date. When I began writing, I got immersed in the process so much that the short comedy of errors turned into a novel, which when published on my blog received enormous response from the readers all around. It drove me to approach publishers, who liked it and got me published.

The title is “Oops! I fell in love!”, ‘just by chance’ is the subtitle. The title suited the plot and was catchy as well. It clicked just while writing the book. I don’t think it is ‘too’ long.

Nowadays, every other person is getting published, penning a story revolving around his/her campus life. And most of it is clichéd. What would you say is the USP of your first book? What makes it “different”?
My first book is less about college life and more about the erroneous love story of the protagonists. As I said it’s a comedy of errors, packed with emotional punches. I’ve not read many other college based romantic and humorous novels, so I can’t really comment about how it is different. Regarding my work, I’ll say that it’s straight from the heart, innocent with whacky humour. People could relate themselves to the book.

How much of Kanav is Harsh? Is there a real Tanya (in your life?)
Kanav is just the manifestation of my imagination. I’ve made the character too shy and too ugly-looking, which thankfully, I’m not. Harsh is around 10% Kanav, in relation to his xenophobia. I can’t chatter much when I’m facing complete strangers, much like Kanav. Regarding Tanya, I just wish there had been one in my life.

Was there an interesting moment/anecdote when (any of) your friends realized how their personality traits reflected in the characters of Aryan, Anuj, and Sameer?
One of the chapters written in my book was actually a real life incident that occurred in my friend’s life. He read it when my book was published. He was dumbstruck that I had mentioned about the event in my book. Initially, he got frenzied but then I made him realize that his interesting story was shared across India and made people laugh. Thereafter, I even managed to extract a handsome treat out of him. Hope he’s not reading it. (Anuj!)

If the book gets picked up for a movie tie-up, who would you want to see play the main protagonists?
Wow, interesting question. The heroine, without any doubt, would be Katrina, since while writing the book I imagined her to be in place of Tanya. Yes, that was the inspiration. As for the hero is concerned, I can’t think of any actor who could fit the role of an ugly hero. After watching 3 idiots, I think Sharman Joshi could fit in the role. He can aptly suit the role of a shy and timid guy.

We heard that your second book is a sequel to the first one. Would you like to tell us something more about the story – just briefly. When do we get to see the second book?
My second book is the sequel to the first book, which carries the story of my protagonists Kanav-Tanya forward. My first book ended on an incomplete note and my readers desperately wanted to know what happened next, which made me write the sequel, despite having no such plans initially. Interestingly, now Kanav-Tanya’s story has turned into a trilogy. After my second book, I’ll launch the third one in the series, which will complete the story. The second book will be out in the market in July.

So, how lazy are you really?
I’m very lazy when it comes to writing/thinking again for the book, after I’m done with the process of writing it. Once I finish the epilogue and finish the editing-rewriting part, I go for a long break from writing, where I explore my other interests such as music or photography.

Is that why the thought of “The Lazy Writer’s Competition” bubbled in your mind? Or was it just another smart marketing gimmick? (If that’s the case- it worked!)
I was actually out of ideas. I couldn’t devise a title for my second book. That was when i got this idea of asking my readers to construct a title for me. It worked. I’ve got two titles, which I’ve considered for my second and third books. Also, being a social media enthusiast after handling my venture thewittyshit.com’s social media handle since the last one year, I was adept in using social media for this cause. Of course, another intention was to create a buzz about my second book, which has proven to be successful in the last one 20 days.

You seem to have made great use of social media platforms across the web. What is your take on social media optimization today?
Social media has emerged as the cheapest and one of the most effective modes of advertising and brand-building in the current date. Be it facebook, twitter, linkedin or blogs, the use of social media enables it to get traffic as well as advertising across the network users. I feel that SMO is as important as SEO, since nowadays social media platforms have more engaged traffic than the search engines and it would give any venture a greater visibility at very low cost.

Quick 5
Favorite authors: J.D Salinger, Roald Dahl, Guy De Maupassant
Favorite books: The Catcher in the Rye, The Autobiography of Yogi, Five Point Someone
Favorite genre: Humour, Biographies
A memorable compliment: “I’m in love with Tanya. Tell me when you break up with her.” – a reader from Abu Dhabi mailed to me.
An unforgettable criticism: When my best-friend said, “Your potential is much much more than these light fiction books that you’re writing. I’m waiting for a book from you that can become my lifelong friend.”

Let’s talk about your creative entrepreneurial venture – thewittyshit.com. It’s a year old now. Tell us about its ideation. The name sure is unforgettable. How did you come up with such a quirky name?
I co-founded this venture with a friend because we saw an opportunity to monetize traces of creativity in common people. We saw that owing to the advent of facebook and twitter as social networking giants, many people started writing one-liners, which were sometimes witty and original. So we created this platform to give the common man recognition, voice and get their creativity reach a wider audience alongwith fetching them monetary incentives through contests where they could fabricate punchlines for companies and start-ups.
Regarding the name, it just happened, much like our tagline ‘Because wit happens…’

What’s new with thewittyshit? Something our readers should look out for?
We’ve a very active fanpage, with over 16 thousand members till date. Join the page and register on the website thewittyshit.com and get your creativity recorded in a wit-book. I’ve graduated right now from IIT, so now I’m pursuing the venture full time. We’re currently working on the contest section which will have monetary incentives for the user. We hope to launch it within a month, while wit-store – a store that will retail all our wit-based merchandise would be launched within the next five months.

What do you like doing most when not doodling some witty shit or writing an interesting story?
I like photography. I’ve my own photoblog named ‘Rods and Cones’. I’m a connoisseur of music. I collect musical instruments and like playing them.

So, on a departing note: if you had a book club, what would you name it? And what would you be reading in there? (Please don’t just say- “books!”)
I’ll call it “Serendipity”. It’s my favorite word and it also echoes the chance encounter with a random book that could change your life forever.