Home / Books / Give Your Heart a Break 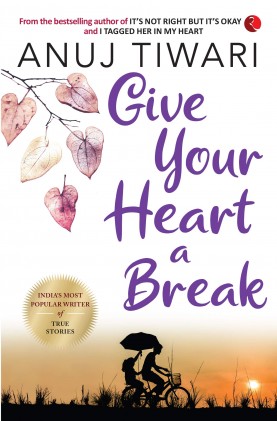 Give Your Heart a Break

When is it enough, really enough?

In love, never! In abuse, forever.

Written flawlessly with tenderness and fury, heartbreak and acceptance, Give Your Heart a Break is the story of Addya, a flamboyant, confident woman, leading a carefree life. That is, until the day she gets married, and her life suddenly takes a turn for the worse. Caught in a steadily deteriorating relationship, Addya is stretched to her limits as she tries to cope. Through it all, she has her brother Agastya standing by her side like a rock, vowing to avenge his sister.

Will Addya be able to survive unscathed? Will Agastya succeed in seeking justice? Or will he succumb to the wounds of his past? Can the love of his life, Tarjani, provide him succour? Inspired by a true story, this is an incredible tale of abuse and vulnerability, of the exhilaration of romance, of an unshakeable sibling bond that is at once unique and universal. Above all, this is Anuj Tiwari’s unsparing account of love and loss, capturing the grit and courage of a woman trapped in a loveless relationship. 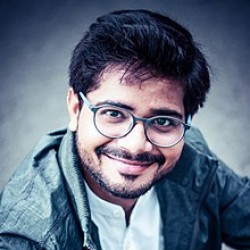 A TEDx speaker and marketing consultant settled in Mumbai, Anuj Tiwari was brought up on the bustling streets of Bareilly, where chaos is the order of the day.

There, he learnt to circumvent the streets first, and then his convoluted life. Instead of getting a ‘modern education’, Tiwari studied in a Sanskrit-medium school where there were no English books.

Seeing his neighborhood kids reading from colorful storybooks, he started building dreams of being able to read in English; however, he kept those dreams to himself in the fear of being mocked at.

Tiwari, who has seen his family go through a tough time and being humiliated in his childhood, was thus encouraged to push the limits.

Despite going through six months of depression and trying to give up on his life in college, Tiwari is now the bestselling author of three books.

He sold his books on the streets of Mumbai, and has been listed as one of the top ten most influential authors in India in 2016.