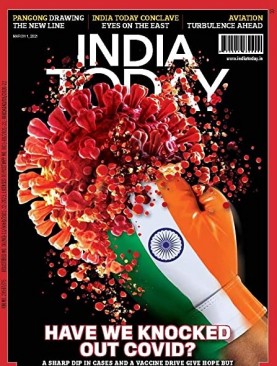 Multiple Covid-19 epidemiological models projected doom for India in 2020. In March, as India imposed an unprecedented nationwide lockdown, an expert from a Washington DC-based public health research organisation forecast up to 300 million cases and 200,000-250,000 deaths in India. In August, a modelling study by the Institute for Health and Metrics Evaluation at the University of Washington estimated India to see nearly 500,000 deaths by the end of the year. It was easy to believe these nightmarish predictions. India, with its densely-packed urban centres and abysmal health infrastructure, seemed primed for a health catastrophe.

Fortunately for us, none of these gloomy scenarios came to pass.On February 9 this year, India recorded less than 9,000 new Covid-19 cases in 24 hours. It was the lowest in eight months from a high of 95,735 cases on September 10, 2020. India’s Covid case and death counts as on February 9 were 10.8 million and 155,195, respectively, compared to 27 million cases and 465,000 deaths in the US. Given that the country has a population of 320 million, per capita infections in the US were 12 times those in India.

As the West battles with renewed waves of the virus, India is slowly getting back on track. The economy is on course for a full recovery by next year, and the stock market is booming. Schools and colleges, cinema halls and malls are slowly reopening, and passenger aircraft are flying to near-full capacity.No new Covid-19 cases have been reported from 188 of India’s 718 districts over the past week. Death rates are falling sharply and, on February 16, national capital Delhi recorded just 94 daily cases, its lowest in nine months.

How did India defy the dire projections? The question has confounded many experts. The answer lies possibly in a combination of factors, a young demographic, latent herd immunity and an early, severe lockdown. For starters, India’s youth bulge has worked to its advantage. More than 65 per cent of our population is under the age of 35. Eight out of 10 Indians who died of Covid were above 45 years of age.

Serological studies have also revealed that the actual number of cases may well be higher than what the official figures capture. This means many people who contracted the virus were asymptomatic; that is, they did not exhibit symptoms to get tested and be counted among the infected. For example, 60 per cent of the residents of India’s largest slum, Dharavi, were found to have been exposed to the virus, suggesting that the area might have achieved herd immunity and beaten Covid.

Although the sudden lockdown on March 24, 2020 was considered controversial, it perhaps prevented the rapid spread of the virus and gave the country a chance to spruce up its medical infrastructure. Another area India seems to have done well in is in its vaccination drive. In only 24 days, the country managed to vaccinate almost 7 million people. It took the US 26 days and the UK 46 to achieve the same target. A country that was to have wilted under Covid-19 has now exported more than 16 million doses of the vaccine to 20 countries. Seven more indigenous Covid vaccines are in the research stage, and home minister Amit Shah says India is preparing to meet 70 per cent of the world’s Covid vaccine demand.

Have We Knocked Out Covid?’ Associate Editor Sonali Acharjee spoke to India’s top medical specialists to answer this big question. She discovers we can be complacent only at our own peril. Mumbai, for instance, has reported a fresh outbreak of cases even as it resumed its local train services and reopened schools. We are still not quite sure whether we can handle the newer mutations of Covid-19 that have been found in Brazil, South Africa and the UK.

Vaccine experts are still unclear whether the existing vaccines will give a lifetime of protection or whether new Covid vaccines will have to be developed every year. We have to remember that approval for vaccines has been given on an emergency basis, which, according to WHO norms, is given only after 50 per cent efficacy has been proved. In India, the AstraZeneca vaccine, for which data is available, has an efficacy of 53-80 per cent, depending on the number of doses and the gap between them. For the other vaccines, data is yet to be validated. Worryingly, vaccine hesitancy has slowed down the vaccination drive.

Despite the widespread availability of two vaccines, Covaxin and Covishield, only 65 per cent of those who registered for the vaccine came forward to take it and 37.5 per cent of those who took the first dose had returned for their second. The Serum Institute is already sitting on some 55 million doses of its vaccine and has temporarily halted manufacturing till these are used up. This is not good news because our economic recovery is contingent on a large percentage of the population being shielded from infections through vaccines.

Many questions remain about the state of the pandemic. Other countries have witnessed severe second waves, which is a distinct possibility in India as well, as its economy opens up. New discoveries are still being made on the nature of the virus, even as the consequences of fast-tracking vaccine approvals are yet to be known. Experts advise that we maintain social distancing and hygiene protocols despite the vaccination drive. The Covid-19 virus remains a hidden and silent enemy about which we still don’t know enough. Be ever vigilant. It is our only hope.