Home / Books / The Discoveries: Great Breakthroughs in 20th-Century Science, Including the Original Papers 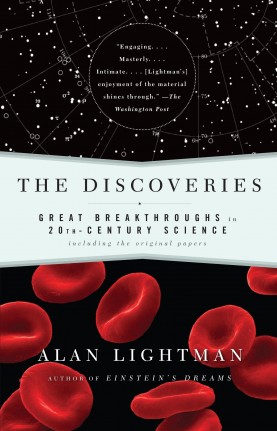 The Discoveries: Great Breakthroughs in 20th-Century Science, Including the Original Papers

An extraordinarily accessible, illuminating chronicle of the great moments of scientific discovery in the 20th century, and an exploration into the minds of the remarkable men and women behind them. We know and read the literary masterpieces; how many of us have had the opportunity not only to read but understand the masterpieces of science that describe the very moment of discovery?

The last century has seen an explosion of creativity and insight that led to breakthroughs in every field of science: from the theory of relativity to the first quantum model of the atom to the mapping of the structure of DNA, these discoveries profoundly changed how we understand the world and our place in it. Alan Lightman tells the stories of two dozen breakthroughs made by such brilliant scientists as Einstein, Bohr, McClintock and Pauling, among others, drawing on his unique background as a scientist and novelist to reveal the process of scientific discovery at its greatest.

He outlines the intellectual and emotional landscape of each discovery, portrays the personalities and human drama of the scientists involved, and explains the significance and impact of the work. 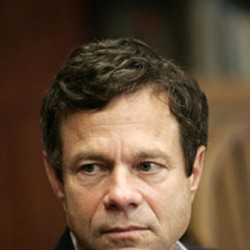 Alan Lightman is an American writer, physicist, and social entrepreneur. Born in 1948, he was educated at Princeton and at the California Institute of Technology, where he received a PhD in theoretical physics. He has received five honorary doctoral degrees. Lightman has served on the faculties of Harvard and the Massachusetts Institute of Technology (MIT) and was the first person at MIT to receive dual faculty appointments in science and in the humanities. He is currently professor of the practice of the humanities at MIT.

His scientific research in astrophysics has concerned black holes, relativity theory, radiative processes, and the dynamics of systems of stars. His essays and articles have appeared in the Atlantic, Granta, Harper’s, the New Yorker, the New York Review of Books, Salon, and many other publications. His essays are often chosen by the New York Times as among the best essays of the year.

He is the author of 6 novels, several collections of essays, a memoir, and a book-length narrative poem, as well as several books on science. His novel Einstein’s Dreams was an international bestseller and has been the basis for dozens of independent theatrical and musical adaptations around the world. His novel The Diagnosis was a finalist for the National Book Award.

His most recent books are The Accidental Universe, which was chosen by Brain Pickings as one of the 10 best books of 2014, his memoir Screening Room, which was chosen by the Washington Post as one of the best books of the year for 2016, and Searching for Stars on an Island in Maine (2018), an extended meditation on science and religion – which was the basis for an essay on PBS Newshour.

Lightman is an elected fellow of the American Academy of Arts and Sciences. He is also the founder of the Harpswell Foundation, a nonprofit organization whose mission is “to advance a new generation of women leaders in Southeast Asia.” He has received the gold medal for humanitarian service from the government of Cambodia.