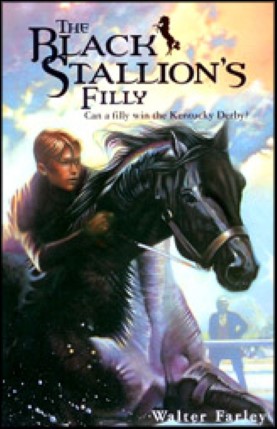 Available
Sheâ€™ll never be a racehorse,â€ murmurs the crowd as Black Minx is led into the sales ring. But Alec Ramsay thinks differently and buys the Blackâ€™s first filly to train her for the Kentucky Derby. But Black Minx, like her sire, has a mind of her own. This fast-paced racing story follows a great horseâ€™s journey through training and preliminary races to the opening gate at Americaâ€™s most famous racetrack: Churchill Downs.

Walter Farley's love for horses began when he was a small boy living in Syracuse, New York, and continued as he grew up in New York City, where his family moved. Young Walter never owned a horse. But unlike most city children, he had little trouble gaining firsthand experience with horses-his uncle was a professional horseman, and Walter spent much of his time at the stables with him.

"He wasn't the most successful trainer of race horses," Mr. Farley recalled, "and in a way I profited by it. He switched from runners to jumpers to show horses to trotters and pacers, then back to runners again. Consequently, I received a good background in different kinds of horse training and the people associated with each."

Walter Farley began to write his first book, THE BLACK STALLION, while he was a student at Brooklyn's Erasmus Hall High School and Mercersburg Academy in Pennsylvania, and

finished it while he was an undergraduate at Columbia University. It was published by Random House when he was 26. He used his first advance to go traveling and after that hardly stopped longer than it took him to write another book. He traveled and lived in Mexico, Hawaii, the South Seas, most of the South American countries, the Caribbean Islands, and Europe.

The appearance of THE BLACK STALLION in 1941 was hailed by enthusiastic boys and girls all over the country. An avalanche of mail urged Mr. Farley to write more about Alec Ramsey and the Black. But World War II intervened. Mr. Farley went into the US Army, where he spent the next five years. Most of the time he was assigned to Yank, the army weekly magazine, and he was also trained in the Fourth Armored Division.