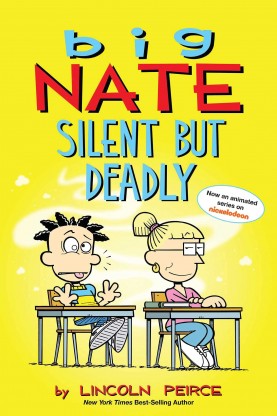 Now an animated series with Paramount+ and Nickelodeon!Middle school is a breeding ground for mischief and dreaming big for Big Nate and his pals! Join Nate and the gang for nonstop laughs in this latest collection of the New York TImes bestselling Big Nate comics series!

Everyone’s favorite sixth grader is back for more misadventures, and Big Nate: Silent But Deadly smells like a winner! Whether he’s showing the ropes to a detention rookie, campaigning for the Student of the Month Award, or writing hilarious movie reviews for The Weekly Bugle, Nate Wright never fails to make his mark at P.S. 38. But middle school’s no bed of roses. In fact, sometimes it just plain stinks.

Just ask the Great Nose-ini! Nate’s alter ego with a sense for scents can smell trouble a mile away . . . or at the very next desk. Was that you, Gina? 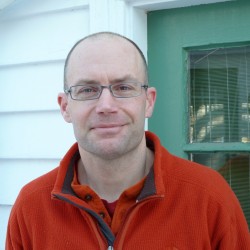 Lincoln Peirce is a cartoon artist from Portland, Maine. He lives with his wife and two children, and occasionally gives lectures to students about cartoon creating.

Big Nate appears as the first cartoon on The Maine Sunday Telegram in the comics section.

He studied art at Colby College in Maine were he began cartooning. He also studied at the Skowhegan School of Painting and Sculpture before teaching art and coaching basketball at a New York highschool for 3 years.

He currently plays hockey with "an old men's league" and describes it as his best sport as a child.

In an interview with the Washington Post, Peirce stated that his last name is pronounced "purse" and is not a misspelling of "pierce."

Lincoln Peirce was a member of the "Surviving as a Print Cartoonist" Panel at the Maine Comics Art Festival with fellow cartoonists Corey Pandolph (Barkeater Lake, Toby:

On the panel Lincoln revealed he is currently working with some animation and licensing projects including the addition of a Big Nate island to the online game Poptropica.