Home / Books / A Journey Forever: Iskilaar and Other Stories

A Journey Forever: Iskilaar and Other Stories

Renowned Marathi author bra>G a Kulkarni’s transplanted work, a journey forever: similar and other Stories, is about man's journey for answers to troubling questions after the loss of a loved one or about the search of one's destiny.(Similar, a hum: My self, the spot, man or monkey: dead or alive) in an attempt to understand it there is a way out of life's misery (redemption, the Swami, aqua mum).whether they are in a dungeon, a forest or a temple, the characters find out that sometimes it is best not to have the answers at all (death of a God. Full circle) and continue living the quest forever. 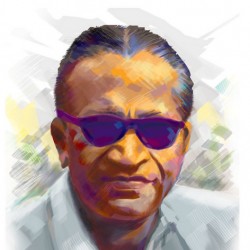 Vilas Salunke is a retired Professor of English and literary translator from Nashik, Maharashtra. He holds a Ph.D. on Robert Frost s poetry. He has published several research articles in reputed journals on modern British and American poets and authors.

On a Cambridge University scholarship, he studied at Cambridge, U.K. in l993. Of late, he has been an active translator of Marathi poetry and fiction into the English.

His published works are Blooms of the Earth (Writers Workshop, Kolkata, 1999), a selection of poems in English translation by Kusumagraj, a Gwyneth Award-winning litterateur.

He is now busy translating a contemporary Marathi novel into the English. Vilas can be contacted at vilasalunke@gmail.com.