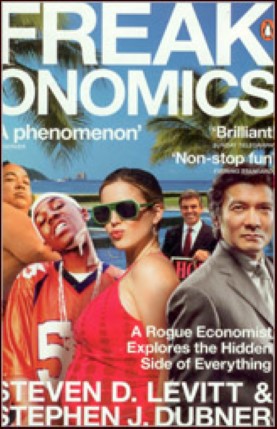 Assume nothing, question everything. This is the message at the heart of Freakonomics, Levitt and Dubner's rule-breaking, iconoclastic book about crack dealers, cheating teachers and bizarre baby names that turned everyone's view of the world upside-down and became an international multi-million-copy-selling phenomenon.

'Prepare to be dazzled' Malcolm Gladwell 'A sensation ... you'll be stimulated, provoked and entertained. Of how many books can that be said?' Sunday Telegraph 'Has you chuckling one minute and gasping in amazement the next' Wall Street Journal 'Dazzling ... a delight' Economist 'Made me laugh out loud' Scotland on Sunday

• One event can have an unforeseen and tremendous impact on some seemingly unrelated things in the future.

• People work on the basis of incentives. Understanding these incentives helps in unraveling the mystery of what people do and why they do that.

• There is a difference between correlation and causation. Two things might be related, but it isn’t necessary that one caused the other.

• Data is a goldmine of information. It can tell you stories if you look meticulously.

Stephen J. Dubner is an award-winning author, journalist, and TV and radio personality. He is co-author of the “Freakonomics” book series, which have sold millions of copies in 40 languages, and host of Freakonomics Radio, which gets 15 million global monthly downloads and is heard by millions more on NPR and other radio outlets.

Dubner’s journalism has also been published in The New York Times, The New Yorker, and Time, and has been anthologized in The Best American Sports Writing, The Best American Crime Writing, and elsewhere. His other books include Turbulent Souls (Choosing My Religion), Confessions of a Hero-Worshiper, and the children’s book The Boy With Two Belly Buttons.

He has taught English at Columbia University (while receiving an M.F.A. there), played in a rock band (which started at Appalachian State University, where he was an undergrad, and was later signed to Arista Records), and, as a writer, was first published at the age of 11, in Highlights for Children. He lives in New York with his wife, the documentary photographer Ellen Binder, and their children.