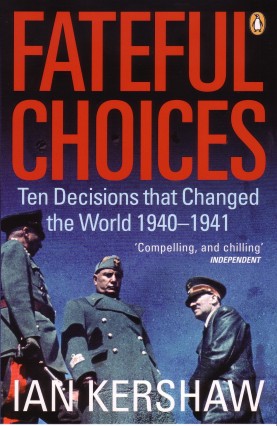 Ian Kershaw's Fateful Choices: Ten Decisions that Changed the World, 1940-41 offers a penetrating insight into a series of momentous political decisions that shaped the course of the Second World War.

The hurricane of events that marked the opening of the Second World War meant that anything could happen. For the aggressors there was no limit to their ambitions; for their victims a new Dark Age beckoned. Over the next few months their fates would be determined.

In Fateful Choices Ian Kershaw re-creates the ten critical decisions taken between May 1940, when Britain chose not to surrender, and December 1941, when Hitler decided to destroy Europe's Jews, showing how these choices would recast the entire course of history.

'This fascinating, closely-argued book adds to our understanding of a terrible war'

'A compelling re-examination of the conflict ... Kershaw displays here those same qualities of scholarly rigor, careful argument and sound judgement that he brought to bear so successfully in his life of Hitler'

'How fortunate that it is Ian Kershaw bringing his immense knowledge and clarity of thought to the task ... brilliantly explained ... an immensely wise book'

Professor Sir Ian Kershaw is a British historian, noted for his biographies of Adolf Hitler.

Ian Kershaw studied at Liverpool (BA) and Oxford (D. Phil). He was a lecturer first in medieval, then in modern, history at the University of Manchester. In 1983-4 he was Visiting Professor of Modern History at the Ruhr University in Bochum, West Germany.

He is a fellow of the British Academy, of the Royal Historical Society, of the Wissenschaftskolleg zu Berlin, and of the Alexander von Humboldt-Stiftung in Bonn. He retired from academic life in the autumn semester of 2008.